This is probably the most common believe that we attach to our possessions in order to avoid letting them go, and it’s one that I’ve personally struggled with.

“But we might need that” has been handed down from my depression-era grandparents (not that that’s an excuse!) and probably their immigrant parents before them. I’ll never forget cleaning out their house after they had moved out, and finding a drawer full of those red nylon mesh fruit & veg bags. Really! What my grandmother was thinking they could be used for, I have no idea. 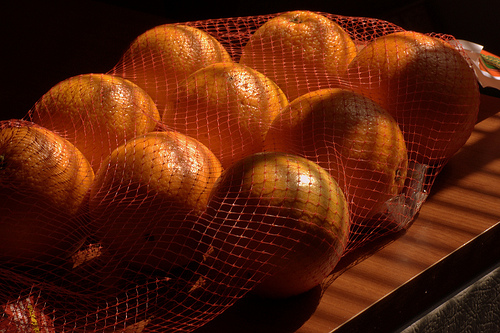 In our consumer culture of disposal goods, there is something admirable (and definitely environmentally friendly) in reusing and repurposing items, so there is a balancing act here. If something is truly useful and we have clear plans to use it in the near future, then there’s good reason to keep it.

The thing is, many of us have our own version of red nylon mesh bags, which just end up sitting in drawers and tucked into corners for years.

When we moved to London from Minnesota, we had been living for 8 years in a 3 bedroom house with a basement and 2 car garage (we are now in a 1 bedroom flat with no storage). During that clear out, we recycled, donated, and gave away everything we possibly could. Yet week after week I was still taking out to the garbage 1 or 2 black bags full of items that were of no use to anyone.

Now, this is embarrassing to admit because all this occurred after my realization of the impact of clutter. While I had already done a fair amount of clearing out, obviously there was a lot more there. Some of it we had inherited when we bought the house, but most of it was leftovers from projects that at the time we thought we might use again – old paint, scraps of chicken wire, broken flower pots, etc – but was soon forgotten.

What’s important to consider is what’s really happening when we say “but maybe I’ll need that someday.” What are the deeper fears? What are we telling the world?

And what if we get to the point of having thrown it out, and then wanting it. What then? What’s the worse that would happen?

How does that compare to the lightness and space gained from having let it go?

Photo by “Just a Prairie Boy“.