I know, I know, I shouldn’t listen to the “should’s” in my head. I should just let them go. And I should be able to do that easily because I’ve done so many self development courses and followed the experts that teach this. So I should be much better at it than I am. Really, I should.

I feel the weight of all these “should’s” dragging me down. They are very heavy. They suck away my creative energy, my life force. They make it hard for me to get anything at all done, not to mention the things I “should” be getting done. Sometimes they paralyze me.

I’ve had periods in my life when I’ve been free of them. After we moved to London I tried to continue my interior design business. After all, it had only been a couple of years since I had made the career change and completed another 4 year bachelor’s degree to be an interior designer. I couldn’t imagine not doing design and wasting that education and the time and effort I had spent doing it. I couldn’t face that thought so I really, really tried to do design.

It wasn’t working for me – and I felt like I was banging my head against the wall every day that I was trying to make it work.

So I went to see a coach. She said: Maybe it’s not going to happen for you here and you could just let it go.

I welled up with tears. I knew deep down that she was right, but I had created so much pain for myself by listening to the “should’s” that I had to first have a good cry to release it.

That meeting was on a Thursday. I remember because that weekend we went out of town and I’ll never forget driving along with this euphoric feeling – a whole mountain of “should’s” and related pain had been released and I felt lighter and brighter than I had ever felt. 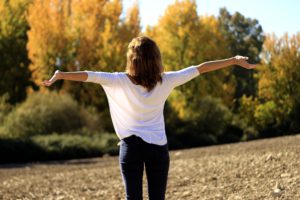 But gradually the “should’s” slipped back into my thinking. After all, there are very deep ruts in that thinking pathway, and deep ruts can be very hard to get out of. Also, when the road is so familiar it’s easy to go into auto-drive and loose awareness of the road itself. So the “should’s” built up again, the ruts got deeper, and lately I’ve been feeling very, very heavy.

But today there’s a paradigm shift happening in my head. It started with this thought:

There are no rules.

This is my life and I get to create it the way I want. Now, this isn’t about ditching every and all responsibility in life…I do have some integrity after all.

What’s different is that today, when I’ve heard a “should”, I’ve thought – who’s rule is that? Who (or what part of me) says I should be doing that? Where does that rule come from? Is it really one I want to live by?

I’ve found that many of the “should’s” going through my head come from a place of either:
• Over-responsibility, or
• Following along with what other people think I should be doing.

So I’m letting go of those rules. People can take care of themselves – I don’t need to do that for them. And if people think I’m irresponsible or spoiling my dog or that I should have a ‘proper’ job or whatever, let them think that.

This has helped me feel much clearer, but still some of those “should’s” keep floating through my head. (I know, I know, meditate. See? Another should!)

So I turned to The Work of Byron Katie and asked:

Is it true that I am spoiling my dog? A: I have no idea. But I do know that I’m doing the best job I can for him in each moment.

Is it true that I should be working harder, getting more done in my business, following through with more? A: I don’t know…Which part of me is asking this? Because I’ve actually been accomplishing a lot, and have been doing other things that I really enjoy. So maybe it isn’t true, in which case it isn’t absolutely true, so ‘no.’

The last part of her process is called the ‘turnarounds’: “I am not spoiling my dog”, “My dog is spoiling me”, etc. Engaging these alternate thoughts and realities can be great fun and helps release any final attachment to the initial thought.

The amazing thing is, once all that mind chatter is gone, I find I often easily go and do whatever it was that had all the “should’s” around it.

This is effortless activity, being in the flow. It’s creating and getting things done without any stress. It’s bliss.

I really should do The Work of Byron Katie more often!