If you take Hwy 64 heading northwest out of Taos, New Mexico you’ll cross a high, semi-arid plain with rolling hills nestled just west of the Sangre de Cristo Mountains. Suddenly the land gives way to a “techtonic chasm” – a slash cutting right down into the earth – along which runs the Rio Grande River. Cross the suspension bridge with its stunning views, travel a little further, and you’ll see scattered out to your right some strange little buildings.

I had heard about them quite a while back. Started in the 1970’s, these sustainable, self-sufficient, off-the-grid houses use recycled tires & rammed earth for structure and thermal mass, recycled bottles and cans stuck into concrete for walls, and solar panels for electricity. Usually fronted by a greenhouse type space, I always thought they looked strange – certainly unconventional – and maybe even a bit like garbage heaps to be honest.

But I was curious, and as we were in the area this summer, we choose to stay in one. 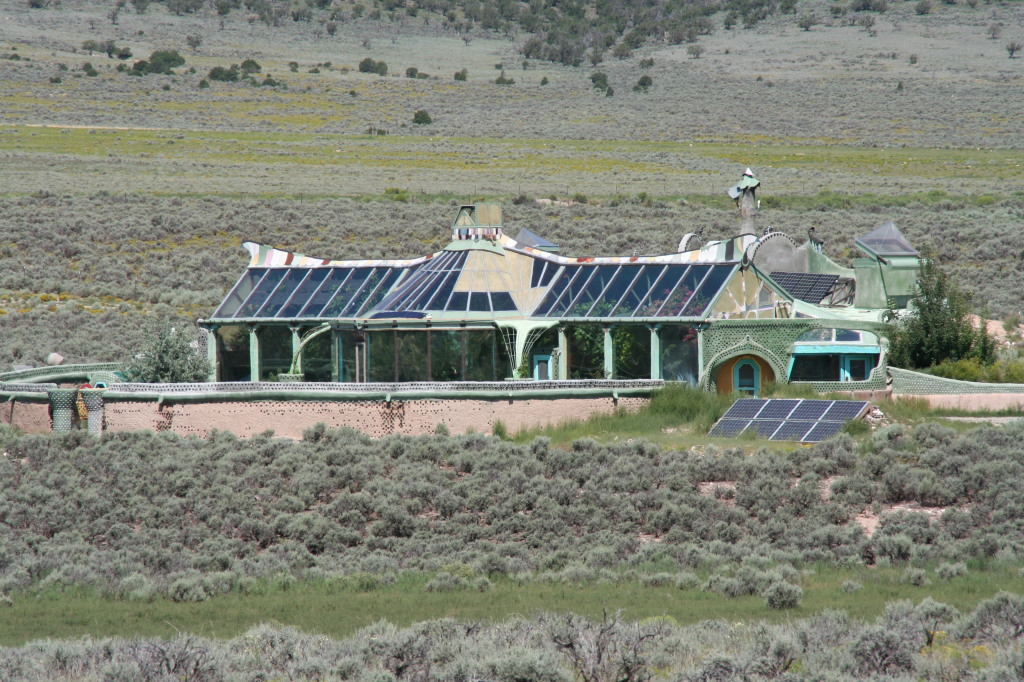 It ended up being the highlight of my summer! And the “Phoenix” was nothing like a garbage heap.

The main structure of the Phoenix, the earth-filled tires, was still visible in the back mechanical hallway. But the living space was all curved concrete walls, embedded with glass and plastic bottles, which functioned as the main decorative feature of the house. 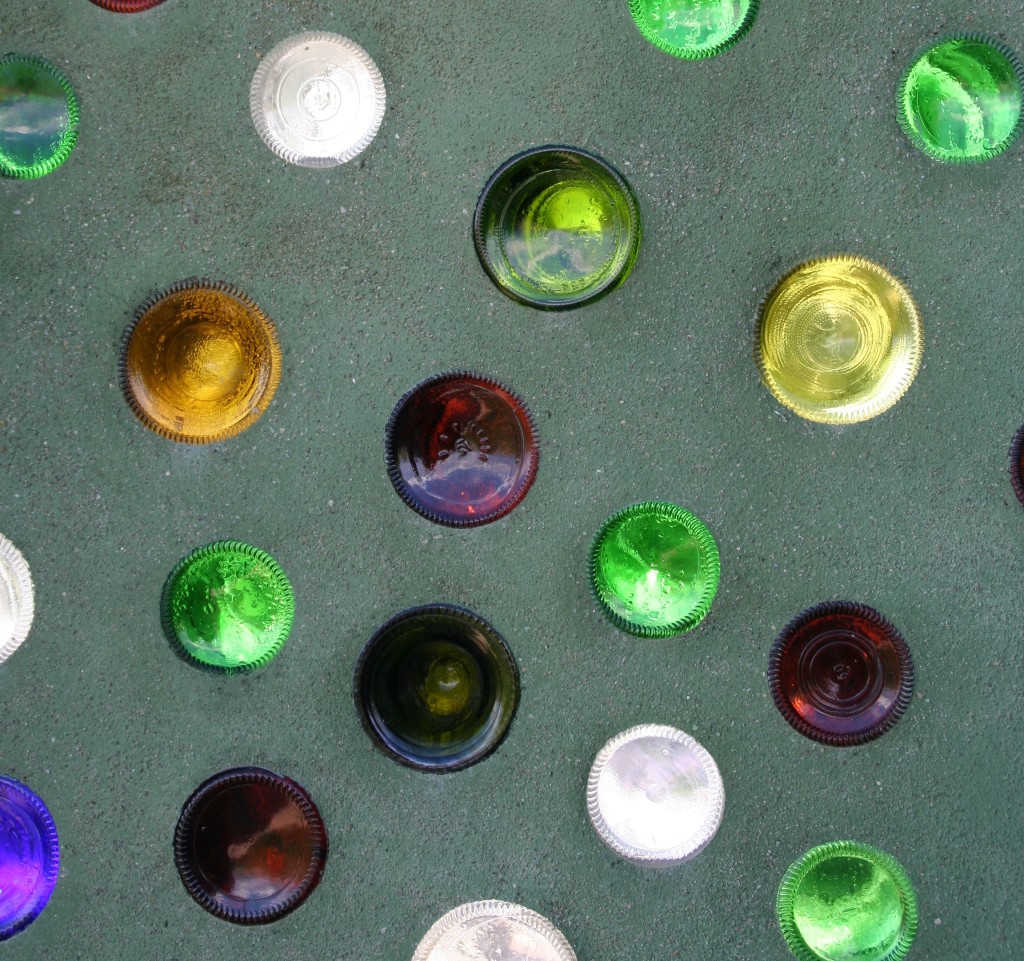 It was a very ‘organic’ architecture – not just because it met the architectural definition of having curved rather than having straight lines (no square rooms at all!) but also both in its use of natural materials and the many plants within the living space. It was like living outside and inside at the same time. 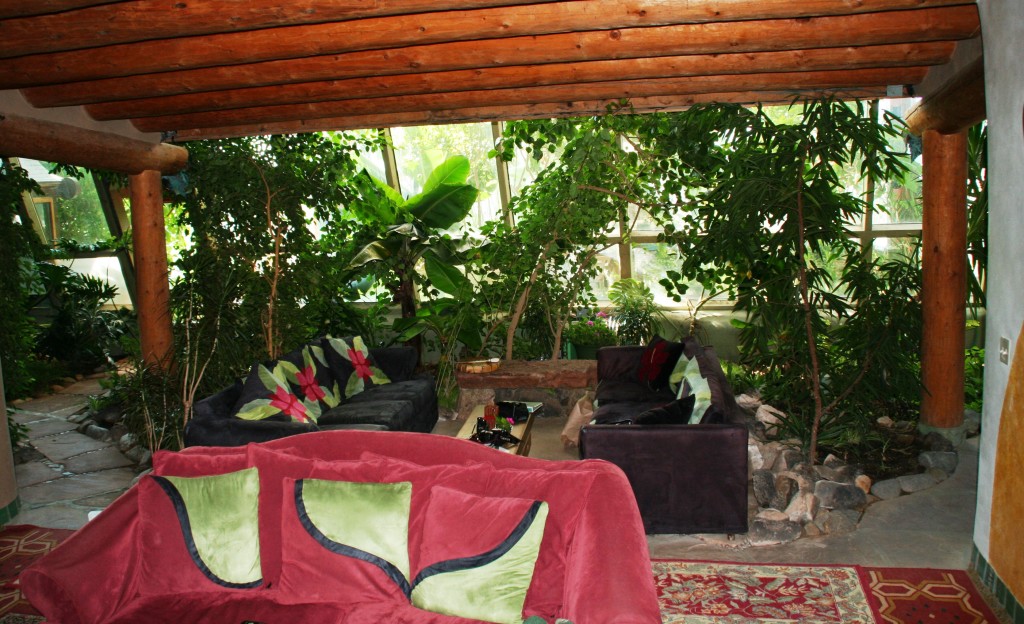 An important part of the system is the greenhouse attached to the front (south) side of the house. In the Phoenix this was an alternative jungle walkway connecting various parts of the house, with edible plants, a fish pond, seating area, and 3 birds. We picked a lime and had it with our dinner there. 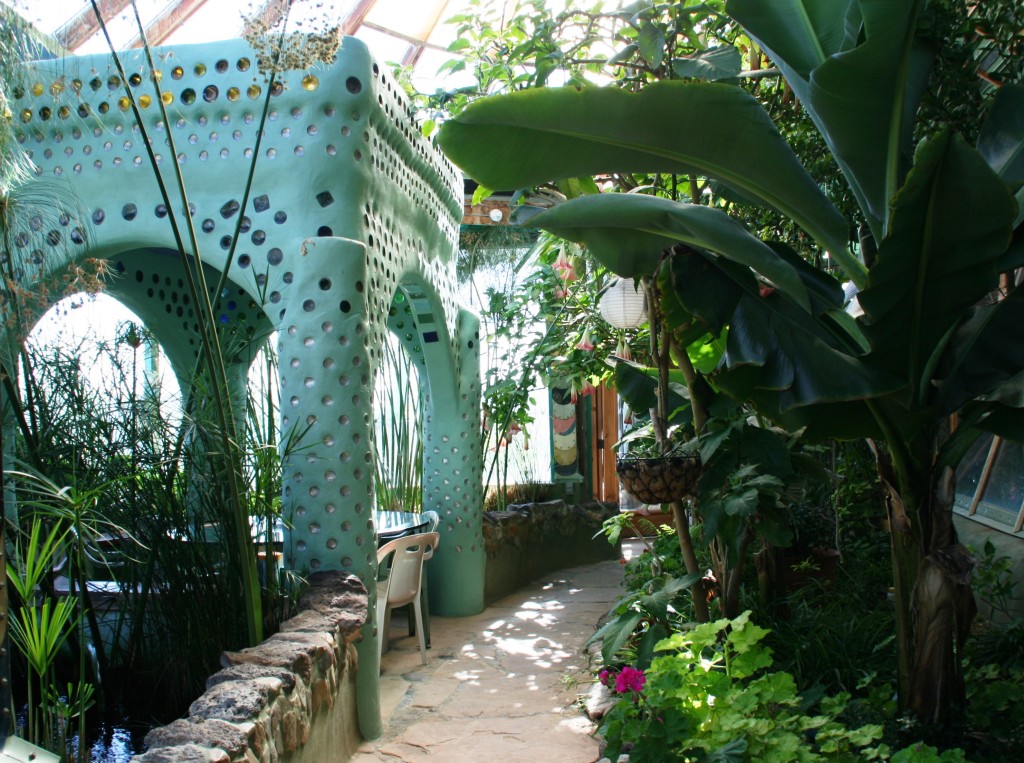 Outside were 10 chickens in the courtyard which disappointingly produced only 1 egg for our breakfast the next morning. (The idea is that Earthships should be able to produce enough food to feed the inhabitants – I’m not convinced they’ve met that goal yet.)

The plants inside the living space were embedded right into the floor. At one point the ‘hallway’ is just a path through the plants. One bedroom wall was even just plants. Ok, not the most private, but still, how cool is that?!

It was like living in a comfortable jungle, but indoors. It was easy to forget that we were actually in a very dry climate on a hot summer day. These sustainable housing systems use water so efficiently that usually the water collected from rainfall on the roof is sufficient for the entire home, including watering plants (as long as the area get close to their average rainfall – 12” per year).

There are many studies demonstrating the mental and physical health benefits of connecting with nature, but this experience of living in a home, in nature, had a profound effect on me that I couldn’t quite put my finger on. As soon as we entered the space we didn’t want to leave and changed our plans to stay as long as we could. It was magical. Yes, I felt relaxed, in awe, inspired. But what else?

Not long after we returned I saw this quote by Heather Plett that gave me my answer:

“Because when we reconnect with the earth, we’ll find ourselves reconnecting with ourselves.”

Yes, I felt that I was reconnecting with a deep part of me that is integral to this natural world we live in, that is at the core of my being.

That evening we grabbed our wine glasses and wandered up to the roof to take some photos. As the sun was setting and casting its orange-y light, we turned around and saw the moon rise about the Phoenix. Yes. Magical. 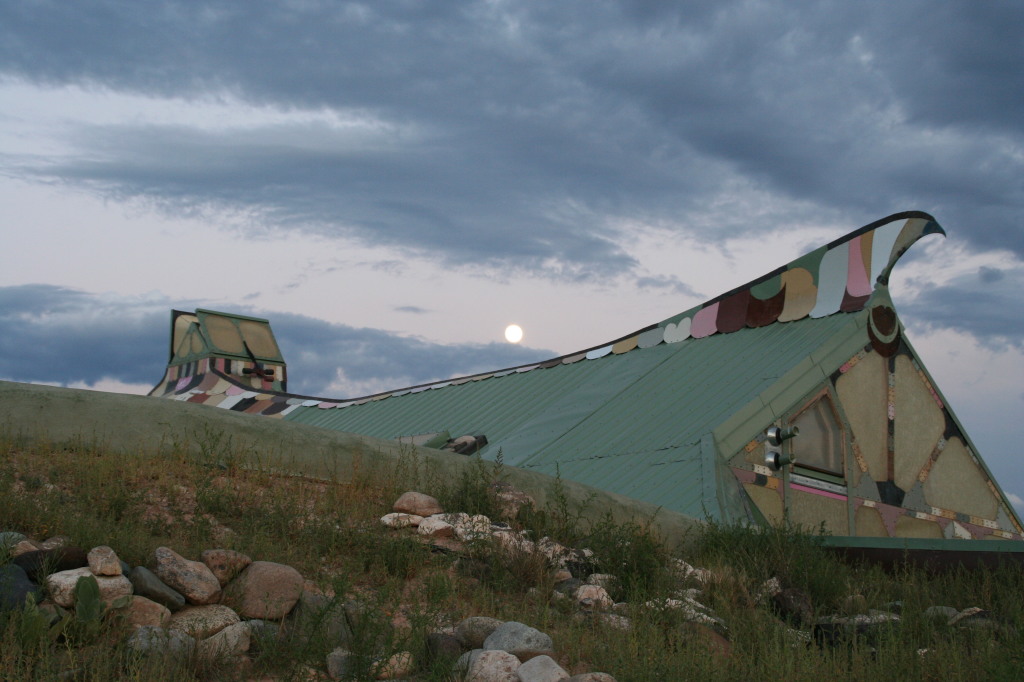 Movie about the creator of earthships, Mike Reynolds: “Garbage Warrior”

“10 Reasons Why EarthShips Are F!#%ing Awesome”

A critique with pros & cons

I’m curious, what was the highlight of your summer?